welcome back! Last month, we developed a rather rudimentary particle system; this month, we’re going to give it a glow up. To remind you, our particle system of last time went something like this: make some shapes out of points, apply a force to the points in some direction, some of the particles move like they’re being carried away in the wind, while others stay put. It was nice, I liked the results, but we can always do more.

@lorage10 on Twitter made some wonderful edits of my generative art that combines drawings or photos with my designs, check out how he styled this circle+triangle thing as a woman’s hair! 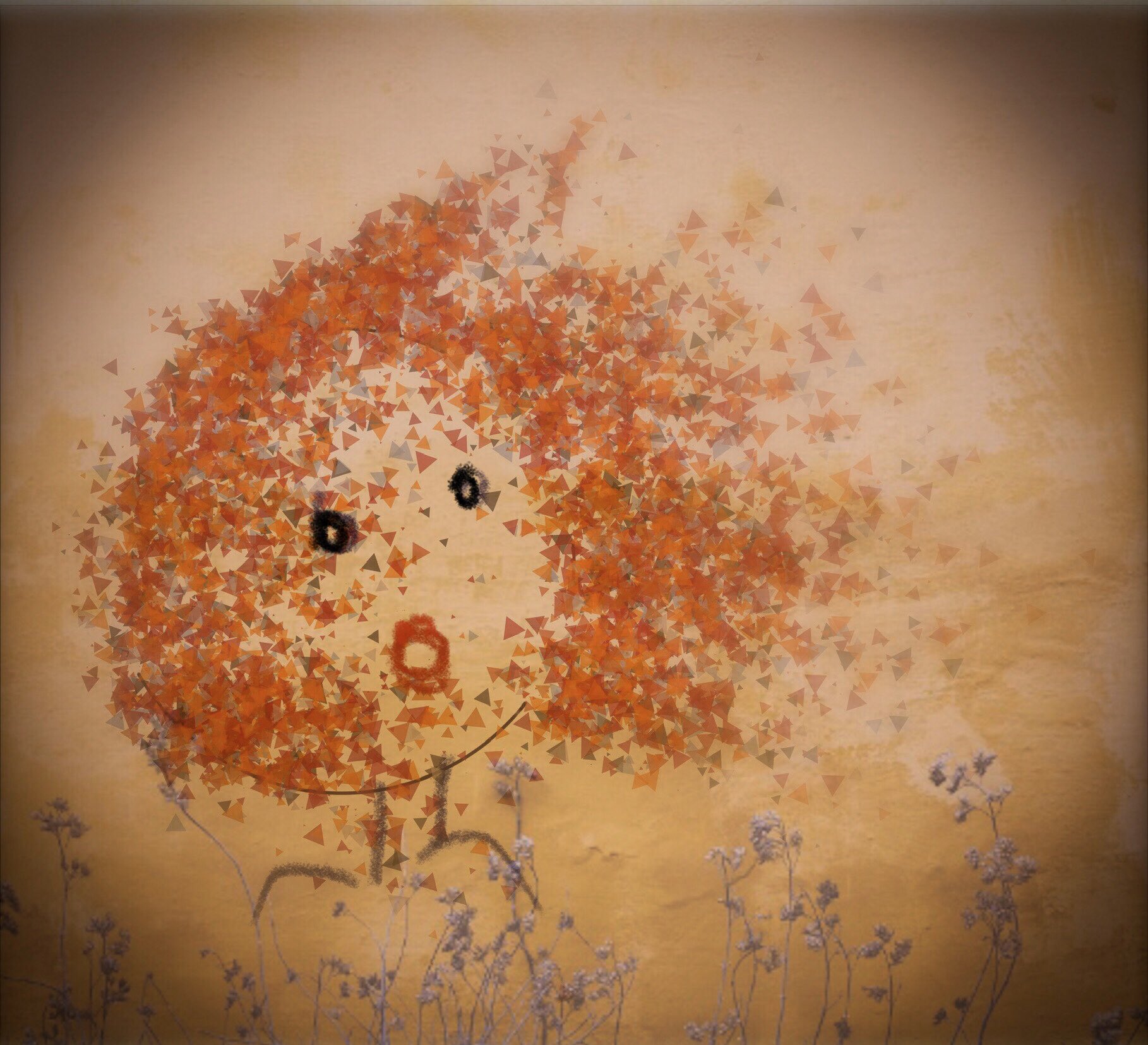 One of the issues with the previous system was that the moving particles were chosen randomly. That can be nice, but I want more control. I also found the parameters for describing the way that the particles moved were too simplistic, I wanted some more randomness and more dials to tweak. We were also limited to equally sized points in our previous system; today we’ll improve on that. And last but not least, we’ll work on everyone’s favorite: color.

The randomness of our original algorithm was fun, but to give more control over the output, I added the ability to specify which particles should move and which should remain static. This is done by supplying the gaps parameter in the splitter() function with a list of vectors specifying the intervals of particles that should move. For example, by setting gaps = list(c(100, 500), c(1000, 2000)) particles 100 through 500, and 1000 through 2000 will move, while the rest will stay put. If you leave gaps = NULL it will default to randomly choosing the gaps as in the previous iteration of the algorithm. This improvement enables more purposeful drawings, where you already have an image of what you want in your head, like this one… 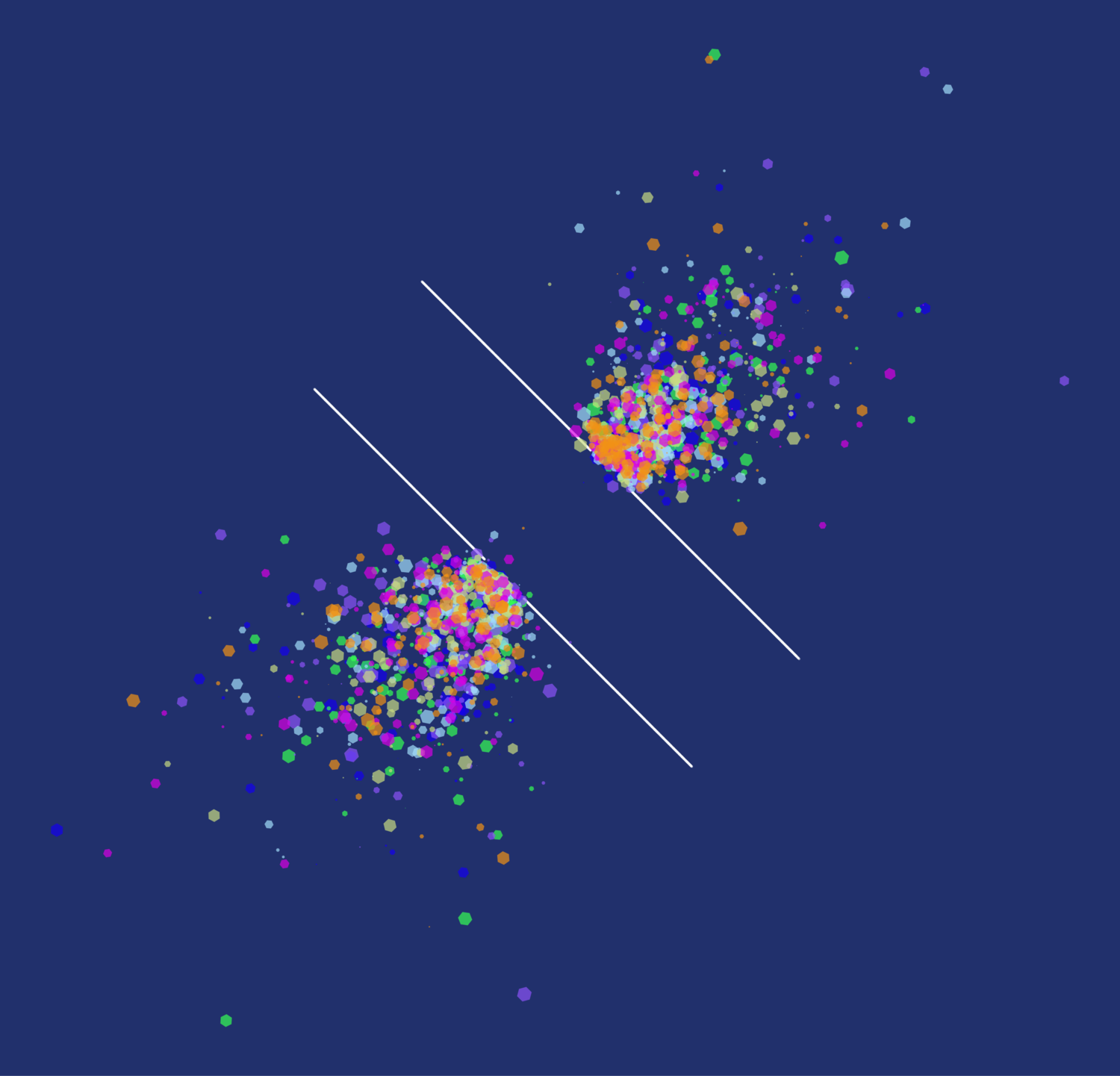 The original algorithm was meant to look like dust particles floating away in the wind. In this iteration, we’ll do away with that restriction and add the ability to render our particles with any shape. I implemented this in two functions (why it has to be two is a weird reason…). If you want to render your points as different sized bubbles, you can use the bubbleize() function, and if you want to render them as polygons, you can use the regonize() function. Under the hood, these functions just add a few columns to your dataframe (r, angle, color) that we will use when plotting to render our points as polygons with geom_regon() from the ggforce package. Since I only want the points that move to be rendered as polygons, this function only applies these new fields to the moving points, and keeps the static points the same. It returns a list of two dataframes, one with the polygons and another with the static points. 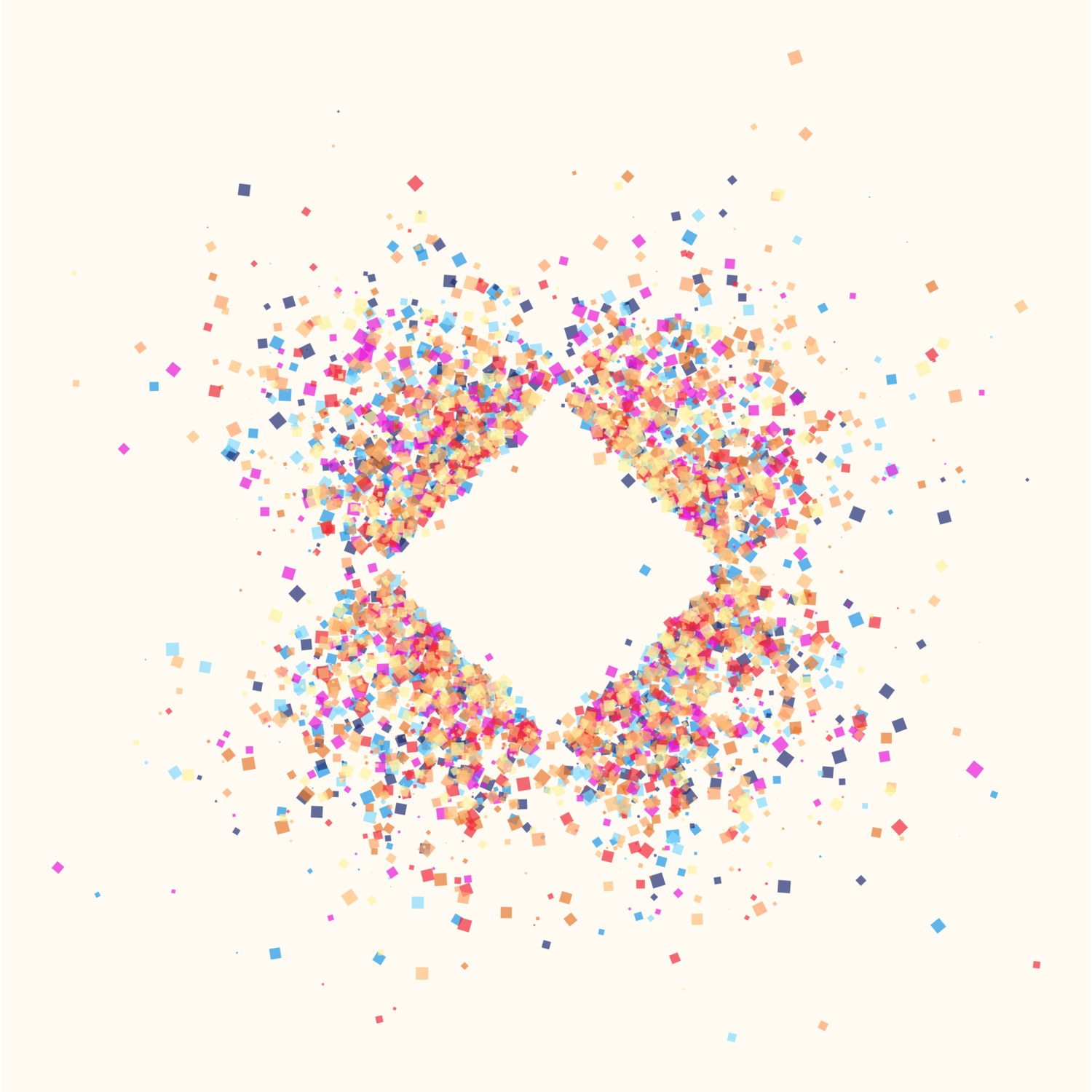 From the beginning, I had hoped to incorporate flow fields to distort the moving particles, but in my first iteration I ran out of time to implement this idea. This time around, I caught a break, because I realized that Danielle Navarro’s wonderful jasmines package might have exactly what I needed. I ever so slightly adapted her unfold_tempest() function for my purposes, and it can now be used to apply some curl noise to the moving particles. The changes I’ve made include allowing you to specify between curl noise or Worley noise, and allowing for a variable scale parameter on each of the points being transformed. If you recall from last time, my particles have a concept of inertia, and now by adding a scale column to the points before passing it to unfold_tempest() you can make it such that points with smaller inertia are affected less. I typically do something like mutate(scale = inertia * 0.1). 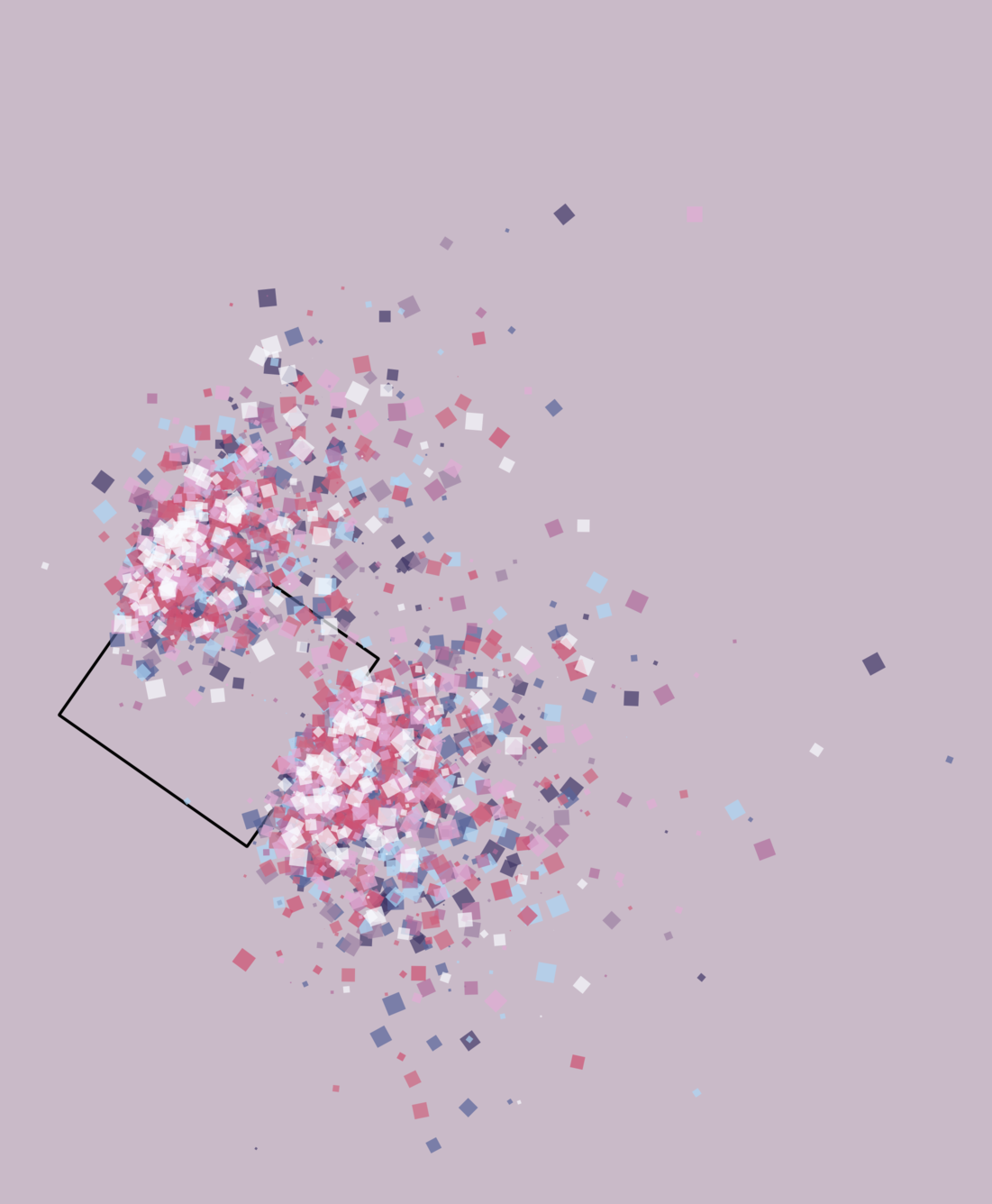 If you enjoyed the color palettes in this post so far, you can thank the incredible artists who worked on the best movie ever, Spider-Man: Into the Spider-Verse. When I was thinking of colors to use in this project, I thought it might be fun to sample palettes from the Spider-Verse. So, I went through the movie and picked several frames that I thought had great colors and sampled them to create some custom palettes. These are very much just my own interpretations, so take them as you will. Each is a list with the colors in a colors object, and one or more backgrounds named bg, bg2, bg3, etc...

Honestly, I have a giant folder full of screenshots I didn’t use because of time. Every frame of this movie is a work of art, and I could keep adding to this list of palettes forever.

one of my goals was to simplify the workflow for making art with this system by improving how “pipable” it is. There’s still a lot of parameters involved and it’s not easy to wrap your head around if you’ve never worked with it before, but I think I’ve streamlined the process of actually making these down to a few key steps. First, you define a seed for each shape–this will determine where your gaps are (ie, which points are static and which ones move). Next comes the meat of the algorithm: you generate a shape, split it according to your seed, apply a “gust” force in some direction, apply some noise with unfold_tempest(), and use regonize() to transform your points to polygons. To wrap up this post, here’s a couple of commented code examples, and as always, the code for the entire project can be found on my GitHub. 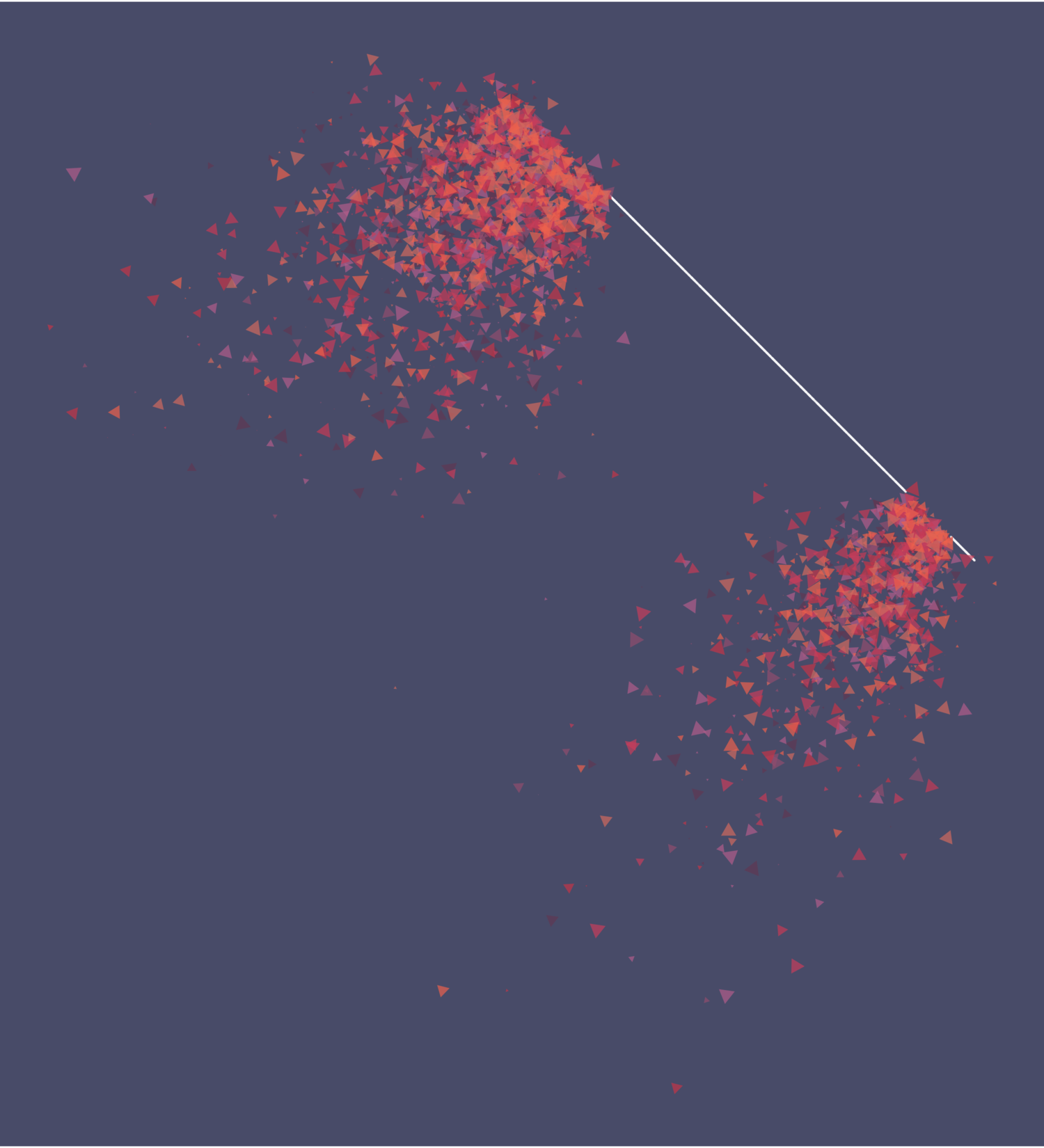 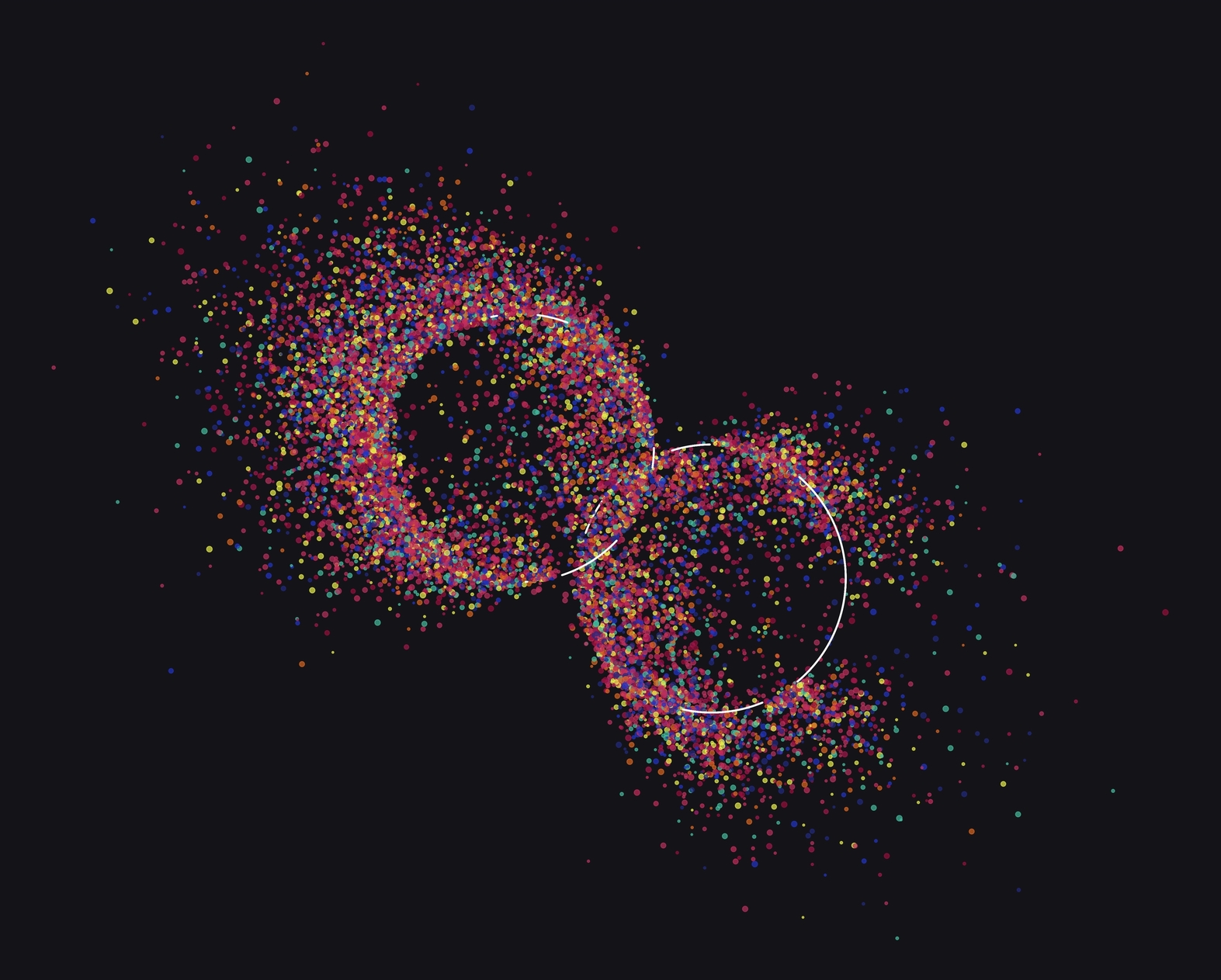 Disintegration (12 Months of aRt, October) Why I'm not making COVID19 visualizations, and why you (probably) shouldn't either